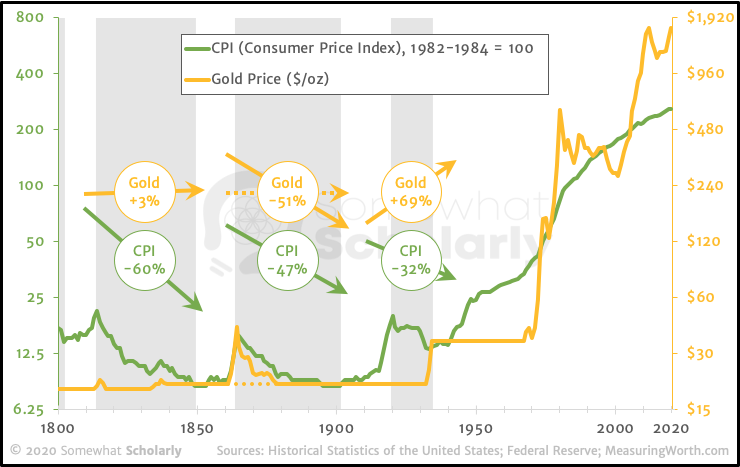 1. “Deflation,” in this post, means “falling prices,” NOT “a contraction of the money supply.”

2. “Hedge” means "a vehicle to preserve purchasing power.”
[By this definition, we could establish an asset as a hedge if its price does not fall as quickly as other prices fall, since its purchasing power would be intact under such circumstances.]

3. Although the label of “hedge” is often used in a binary sense (i.e. an asset either (1) is or (2) is not a hedge), we’re choosing to establish the quality of a hedge along a spectrum. In other words, we want to answer the question, “how good of a hedge against deflation is gold?”

4. Since the average investor is not a day-trader or swing-trader, we will not use days, weeks, or months for our analysis. Instead, we will use annual data points from 1800 to 2020, reflecting a 220-year period in the United States. [If you want to hedge your purchasing power for one year or less, then this analysis is not for you.]

Premise 1. "If the price of an asset goes down while the overall price level in an economy goes down (i.e. during “price deflation”), then such an asset is not a hedge against price deflation." Dubious. Generally speaking, I agree, but as we mentioned in Definition 2, one could make the case that a successful hedge simply needs to fall less than other prices fall. But since this distinction is not central to our analysis, let’s assume we agree with Premise 1 as it’s written.

Premise 2. "The price of gold often goes down during price deflations." Disagree. This claim, for some reason, seems to circulate widely. As you can see below (on an annual time scale), it is simply not true:

In the chart above, the vertical gray bars indicate the 3 major deflationary periods in the United States; the green and yellow circles highlight the changes in the Consumer Price Index (CPI) and the price of Gold during those periods, respectively. The dotted yellow line (and arrow) represent the price of gold if the United States had not fought the Civil War (1861-1865).

With the exception of the Civil War, the price of gold tends to go up during price deflations.

Obviously, the Civil War was not a typical event, and the doubling of the gold price in 3 years (which was also a doubling of its all-time-high) was a serious clue of the rarity of the situation. Indeed, the year 1864 – at the height of the war and the height of the price boom – was the only bad year to buy gold in the 19th century. [But of course, if you buy anything at its all-time-high, you’ve chosen the wrong time to buy].

If you had bought gold before the war, you could sell any time thereafter and NOT lose money – you’d either break even or turn a profit, regardless if prices in the economy were rising or falling.

And of course, if the price of gold remains steady while the CPI is falling, your purchasing power is constantly increasing while you hold gold.

Remember, this assumes that you’re looking to hedge your purchasing power for several years, not several days, and it’s also not a claim about monetary deflation (i.e. a reduction in the money supply). That’s a topic for a separate post.

Have I missed something? Please share in the Comments.

You may also like:
"In a healthy economy, prices go up."